Social media first showcased augmented reality filters in 2015. And yes, it was on good old Snapchat. The technology of face tracking was created by a Ukrainian startup called Looksery. Snapchat bought the company and introduced AR in the stories feature on social media. Snapchat Lenses offered more than 3,000 AR filters and became a massive success with users. After all, that’s what the app is known for.

Instagram was next in line to incorporate AR features. Its filters are often used to make reality a bit more Instagram-like by adding virtual makeup, changing a story’s background, or straight-up changing people’s features to match modern “beauty standards.” Users can even inhabit various characters — from Disney princesses to the Mask himself — in stories when updating their followers.

But TikTok truly gave AR filters a new wave of popularity. The app has created a social network that’s a perfect environment for videos to go viral. And going viral is exactly what brands want. One well-made and, more importantly, well-timed filter, and thousands of people learn about the product that launched it.

The metaverse might hold even more potential for AR development. While it remains a rather vague concept, it’s pretty clear that AR will be more applicable than VR for the next few years: no extra hardware, easy to develop, easy to use. And let’s be honest, augmented reality is way closer to us than virtual reality.

So why are all these social networks focusing on adding AR filters? Let’s explore the top reasons why social media loves augmented reality so much.

AR filters are not only for making users laugh at funny face modifications or allowing them to become their favorite movie character for a minute. Augmented reality for social network apps have more tangible benefits:

Sounds good, doesn’t it? If you feel like a bit more user engagement or virality would help your product, contact us. Banuba knows a thing or two about face filters.

From theory to practice. Now that we’ve told you the top reasons to try AR filters in your app, let’s see how various companies and brands use AR to promote themselves and, of course, entertain people.

What’s a creative way to advertise a cat food brand? How about placing an AR cat in users’ homes?

In 2020, the UK cat food brand Felix launched their Instagram face filter: an animated cat appears on a smartphone’s screen, walking around or asking users to scratch his belly. With people working from home because of the pandemic, Felix decided to provide a cat companion and some fun to newly adapted home workplaces and raise brand awareness. Were they successful? You bet. Millions of UK social media users wanted to play with their new digital black-and-white friend. 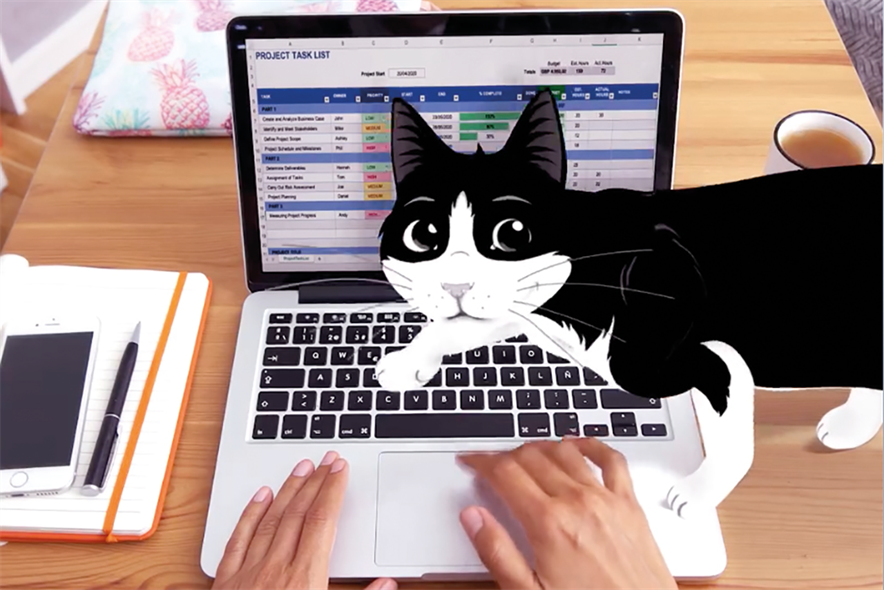 Mostly, Coca-Cola leads their AR campaigns from various regional accounts, but 2.7 million followers on their main Instagram profile says a lot. Pretty good for a soft drink company, isn’t it?

In a collaboration between H&M, a popular Swedish retail brand, and Kangol, an English company known for its streetwear hats and clothing, H&M sold a Kangol collection at H&M stores. To promote the collaboration, they chose quite an unusual approach. Instead of billboards and social media ads, they rolled out six AR filters users could use to create and share music videos. Needless to say, word of mouth about the Instagram filters worked better than tons of money spent on ads.

When users opened their mouths, they were greeted by six potato chip characters cheering and doing a wave at a virtual Indian Premier League (IPL) stadium.

The brand had over 200 influencers promote the filter. What’s interesting is that the influencers were so-called nanoinfluencers: people with no more than 10,000 followers. The brand proved that you don’t need bloggers with millions of followers to achieve great results with an AR collaboration.

Speaking of results, the filter received around 2.5 million impressions overall, all thanks to just one filter. 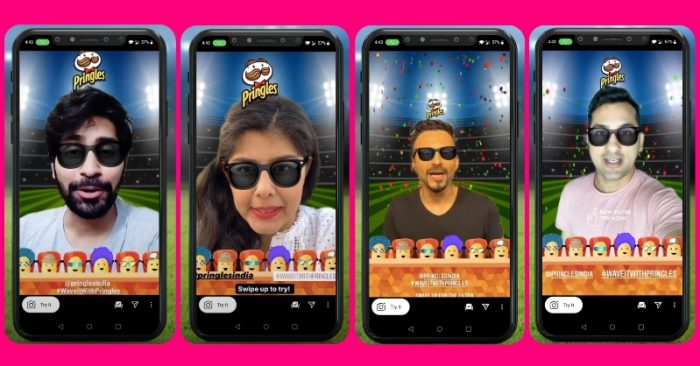 Remember we told you that there’s no limit to creativity when it comes to face filters? Nike proved that social media AR is more than just face masks and games. What about a coloring book where users can design their own pair of sneakers?

Nike Japan released a real-life coloring book containing black-and-white images of various sneakers. After users colored an image the way they liked, they could point their camera at it, and voila — a 3D sneaker with their unique design appeared on their screen. Users could then share their creations on social media as a short animated video.

These examples show what just one AR-enabled filter can do when it comes to creating brand awareness and new user engagement. The trick is to make it fun and original while also keeping users’ interests in mind. In other words, think about why a user would want to try the filter before developing it.

How to bring social AR into your app

There are two major directions you can go if you want to add social AR features to your app: building everything from scratch or using an SDK – a finished piece of software that can be quickly integrated with whatever you’re working on and perform the necessary functions. Both apply whether you already have a project on app stores or are just working on it.

Building everything from scratch is the way for those who prefer to have total control over everything. And we mean everything: from software architecture to user flow and every minor detail in between.

It is also an option that allows more room for maneuver. Whatever modifications you would like to make, it would be much easier to do so with your own software, rather than a third-party one. Moreover, you would be able to tailor the feature set to your goals. Suppose you don’t want things like 3D avatars or gesture recognition – just don’t include them. While SDKs offer some customization options, they aren’t as flexible.

However, if you want to develop your own AR system, you should have quite a lot of time and money budgeted for that. Augmented reality requires a specific skillset, and people with it don’t come cheap. Even then you can expect to spend at least 6 months on an MVP. So the initial investment is rather high.

Although, in the long run, this option is cheaper, as over time the license payments will add up.

The main advantage of using an SDK for all your AR needs is speed. A well-designed and documented one can be integrated with your app in a couple of days or a week. This allows you to go to market much faster than with a completely new system.

The lower upfront investment is also important. A yearly license is much cheaper than the development budget for a comparable feature set. Moreover, you will be getting a stable, tested product that has likely been implemented in many other similar applications and demonstrated its market worth.

Established SDKs also have expansive feature sets besides the core elements (AR-enabled filters, custom backgrounds, beautification, etc.). For example, Banuba Face AR SDK includes hand gesture recognition, hair recoloring with gradient and by strands, 3D avatars, and dozens of other functions. If you are looking to get an edge over the competition, using a well-developed SDK is a way to stand out with the array of creative tools you provide.

You can also use several SDKs for different purposes. Sometimes it can be hard to marry them but many companies acknowledge that and partner up with others to provide native support. For example, Agora focuses on audio and video communication. However, to add more options for their clients, they launched an extensions marketplace where you can get a bunch of compatible modules. And yes, it has AR extensions.

If your startup has promising social media accounts or launches an app with social media elements, AR-enabled filters are great to boost engagement. Just posting photos or sending messages might not be enough to make a product that stands out.

Not sure where to start? Banuba offers a ready-made AR SDK to introduce amazing face filters for your product. You can get a set of custom AR filters without spending weeks of precious time hiring a separate development team. Try our free 14-day trial.

After His Daughter Was Killed on Camera, a Father Is Making an NFT of the Video to Get It Offline

How to Make and Sell NFT Art | Grant Cardone TV