Can you imagine traveling through a shopping center obtaining all the data of each product on the fly, locating it through virtual guides, as in that famous ad ? Hyperreality or augmented reality, the one that mixes what we see with extra information through a virtual HUD, is one of the next steps in the world of marketing. And Xiaomi is taking steps in this direction.

In order to obtain greater efficiency in shopping, Xiaomi has filed a patent registration on February 15, in the name of Beijing Xiaomi Mobile Software Co., Ltd. under the summary “method, device and system based shopping navigation in augmented reality technology” . 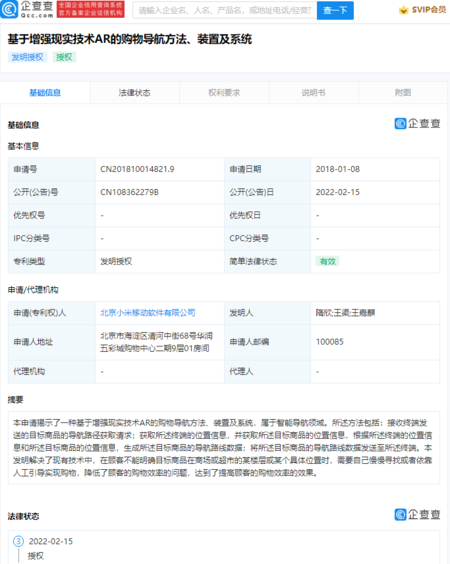 Over the last few months you will have read about the many patent registrations that Xiaomi has been filing for its future mobiles . However, we sometimes forget that Xiaomi is much more than a technology company that sells smartphones. In China, in fact, they prioritize the television market and their e-commerce is currently one of the strongest legs of the business.

The Xiaomi Mi Band 7 will undergo a radical change, according to a patent

Xiaomi’s patent includes the description of a hyperconnected system —by analyzing our geoposition and other data— that would help us find any product within a real store, which would provide data on each purchase, thus solving search times.

Said patent is based on an RA device (based on augmented reality technology) and, according to the declared information, the device sends ” a request to acquire the navigation route of an article from its shipment ” and that the client can find it in its exact location.

This is not the first step of the brand in AR material, since it has several patents for virtual reality glasses and even the registration of prototypes. It is, on the contrary, the first focused on a strictly commercial use. But although it is unknown what other uses it could have, this patent opens up possibilities for the integration of other services, such as the creation of a virtual route to synchronize our race with the new Xiaomi Watch S1 , for example.

–
The news A shopping center in your eyes: Xiaomi patents this advanced augmented reality system was originally published in xiaomist by Isra Fdez .

Melania Accused Of Placing Winning Bid On Own NFT